How to Set a Default Featured Image in WordPress

by Waseem Abbas on September 20, 2018
Share0Tweet0Share0Shares0

Do you want to display a default image for your WordPress posts? You may want to have a fallback in case you forget to add one. In this article, we will share how to set a default featured image in WordPress.

Adding an alternative image will ensure that your blog posts look professional in your theme and when shared on social media, even if you forget to add a featured photo.

There are three different methods you can use to set a default featured image in WordPress:

Method 1: Setting up a Branded Image as Fallback Featured Image

Sometimes you have a blog post with no images and no featured image, and you want a fallback to be displayed as the featured image for this post.

First, open the theme file where you want to add the fallback featured image. It can be any theme file like home.php, single.php, index.php, and more.

Then, in the post loop, you need to paste the following code:

This code will verify that there is a featured image assigned to your blog post. If there is one available, then that will be displayed. Otherwise, it will display default-image.jpg from the images folder of your theme.

Sometimes you may want to use the first image within the post as the featured image. Here’s how to do it automatically…

First, you need to add the following code to your theme’s function.php file:

Next, you need to open the theme file where you want to display the featured image. Simply add the following code:

If you are not familiar with code or want to go the easy way, then you can use a WordPress plugin.

First thing you need to do is install and activate the Default Featured Image plugin. (Check out this guide to learn how to install a WordPress plugin, or how to update plugins via FTP.)

Upon activating the plugin, you need to go to Settings » Media and click on the Select Default Featured Image button. 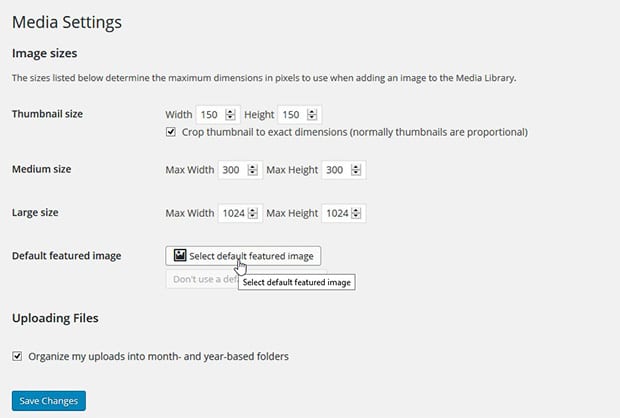 Select an image from your computer and make sure to save the changes.

We hope this article has helped you to learn how to set a default featured image in WordPress. Here are a few other WordPress tutorials you might find helpful. (And did you know that you can use a featured image slider to display your recent blog posts?)

No. That plugin didnt worked for me atleast. i tried but sadly it did not show any thumbnails or featured image. i am currently trying some other plugins as i dont want to dig into the codes as of now 🙂
thanks

Unfortunately adding condition “has_post_image” may be tricky when plugins are used for “latest” or “related” posts, as we don’t want to mess up plugin code 🙂

So, default image plugin may be better in this case.
Alternatively, here is some custom code to get the same results:

You can use it as a starting point and expand if you want custom default images for different post types or categories.

i used that plugin Default featured image. its good.

In option #2, the second step is “Next, you need to open the theme file where you want to display the featured image.”

What .php could that be? any hint would be greatly appreciated. Thanks.